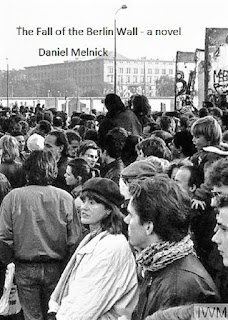 The Fall of the Berlin Wall is a sequel to my earlier novel, “Hungry Generations,” about characters in their late twenties in Los Angeles circa 1972; it featured a legendary German-Jewish/Russian émigré piano virtuoso, the ‘sacred monster’ Alexander Petrov, his wife and two adult children, as well as the composer and their friend Jack Weinstein, as a young man. Now those characters are in their forties in Cleveland in November 1989, and the novel is about personal crises echoing the fall of the Berlin Wall and that upturning of the old order. Jack has become a successful composer and educator, and he is married to Sarah, the intense and irrepressible daughter of the late virtuoso.

The culture of classical music is represented here by Cleveland Orchestra musicians and memories of émigrés in flight from Nazi Europe, some of whom raised their American children in Los Angeles. The lives of the young are partly shaped by popular culture – its music, its preferred drugs, and the influence of punk. The culture of the family is also at risk from memories and betrayals, and members of the Weinstein family share the telling of this story. A surprising bonus is the magnificent music played and imagined here.

It is Thanksgiving week, and Jack does not understand why the couple’s marriage is collapsing. Visiting them for Thanksgiving is Sarah’s brother, Joseph Petrov, who is Jack’s closest friend; the hugely talented pianist son of Alexander is now caught in the middle between his sister and his brother-in-law. The week’s events are told by this trio of characters, and much of the novel revolves around Sarah – her Dostoyevskian intensity, her suffering, her stinging repartee, and the friendships she forms and betrays.

This heartbreaking, tragicomic work brings to life each of the human beings here. The characters in this emotionally compelling, partly political literary work are reminiscent of Myshkin, Nastasya, and Rogozhin in Dostoyevsky’s “The Idiot” or, also, of those in an otherwise greatly shortened version of DeLillo’s “Underworld.” Integrated at the end of the short novel is a section titled “The Past” containing six “origin” stories that explosively evoke what has been at stake in the startling past of the characters.


Here’s a synopsis:
The Fall of the Berlin Wall – a novel
Daniel Melnick (216-378-9302; danielcmelnick@gmail.com)
Two events in November 1989 mark the lives of the novel’s characters. One is the death of a woman discovered naked in the snow outside the Weinstein house, during a massive storm buffeting Cleveland on Thanksgiving. The other event is the fall of the Berlin Wall, taking place two weeks earlier – an upturning of the old order that corresponds to these characters’ desire to change their lives.
​
Jack Weinstein wants to save his marriage to Sarah, the intense, unpredictable daughter of the late legendary German-Jewish classical pianist and ‘sacred monster’ Alexander Petrov. Unaware of what is causing the collapse of the marriage, he tries to confront her dissatisfaction and shifting allegiances, and much of the action revolves around her Dostoyevskian intensity, her repartee, and the friendships she forms and betrays. Sarah and Jack are in their forties and have a sixteen-year-old daughter, Sue, absorbed by her own efforts to deal with boys and drugs.

Joseph, Sarah’s brother, is visiting this Thanksgiving week. He is gay, and his friendship with his straight brother-in-law unfolds dramatically here. Joseph finds himself in the middle of the couple’s conflicts. The week’s events are told by the trio of family members. Both Joseph and Jack are musicians. Joseph Petrov is, like his late father, a piano virtuoso, and Jack is a classical composer and music professor; one of his compositions has just been nominated for a Grammy in contemporary classical music.

The Weinsteins’ friends have their own turbulence. And friendship – both healing and broken – becomes an issue in all their lives. Each of these characters has a piece of the solution to the troubles in the family’s lives, to their joy and grief, to their betrayals, and to a death – possibly a murder – that takes place in their midst.  The Blacks, who live around the corner, are about to declare bankruptcy, for Jacob has been denied tenure and become a ‘freeway professor,’ teaching one class here, another there across town. There are their mutual friends, the Sinclairs, and especially Robert Sinclair becomes the target of Jacob’s bitterness about his life.

One of the Weinsteins’ best friends is an artist and a bohemian of sorts, Tom Mubar, who is divorced and shares custody of his seventeen-year-old son, Paul. Sarah has an affair, and when it collapses, she is drawn to Tom, who understands – she believes – what a disaster her life has become, but she painfully discovers that he does not reciprocate her feelings and is himself trying to endure his own shocks and dangers.

Everything comes to a head when the Weinsteins celebrate Thanksgiving with Joseph and their friends. At dinner, confrontations erupt from the tensions brewing all week, and Sarah, already depressed and disoriented, plummets into potentially suicidal despair.

“The Fall of the Berlin Wall” is a tragicomic portrait of the confusions and heartbreaking disasters in love and friendship, and it also pictures what may endure our collisions – whether it be love, art and music, or simply the welter of conflicting passions in youth and middle age. Six stories presenting the startling past of the characters are integrated into the end of the novel.
(The work is 174 pages, about 51,000 words.)

Excerpt from “The Fall of the Berlin Wall”
“Maybe I’m proud myself, even if I’m shameless. You just called me perfection. A fine perfection! – if just for the sake of being willful I’ve trampled on a million and a brilliant man.”                  --Nastasiya in Dostoyevsky’s “The Idiot”

Prologue
Rachel and Jacob Black – Friday morning, November 24, 1989
It was the wind that made it worse. Twigs were carried in the air, and dead leaves flew by. Yesterday was Thursday, and the black clouds of a huge Thanksgiving storm – greater than anyone predicted – had dropped from the north like a giant descending on the city, a massive primordial force obliterating everything that was familiar, felling trees, dropping a foot of snow on the Heights. And now this morning, the arctic wind kept blowing more snow east into Cleveland Heights with its hilly neighborhoods, the first foothills of the Appalachians. Its houses, built in the first decades of the twentieth century, were porous to the raging winds. The old double-glazed windows rattled violently. The storm blew wires down and pilot lights out, and with few exceptions, there was no heat or light for blocks on end.
When Jacob Black’s heater went out this morning, he descended the stairs to the darkened basement to inspect the pilot light. When he directed a flashlight into it, he saw there was no way he could relight it, for without electricity, the newly installed heater refused to start. So much refused to work in this old house – and in his shithole of a life, as well. A stream of unspoken obscenity filled his mind as he trudged back up the stairs. Rachel and little Mikey waited at the top. When she heard what the situation was, she picked up the kitchen phone. It still worked, and she called Sarah and Jack, who lived up the block.
“Yes to both questions,” Jack answered. “We have electricity, and come on over. We’ll wait out the storm together. Sarah is still sleeping, but she’ll wake up soon.”
So they put on their heaviest winter coats, boots, hats, and gloves as the wind buffeted the windows and pressed in on the house. Rachel carried a packed purse, Jacob a valise with a shoulder strap, and four-year-old Mikey his favorite brown bear with its button eyes, in a plastic bag. Together they stepped onto the porch. The wind temporarily paralyzed them, and its bursting intermittent hum poured from the sky. What began yesterday on Thanksgiving had not relented. Holding onto his son’s hand and gripping his wife’s arm, Jacob inched forward down the porch steps and into the blasting snow. In the driveway, their boots sank in the snow drifts. Small branches flew by, disintegrating in flight.
“I’ll carry you,” Joseph said and lifted the boy onto his shoulders.
“It’s so cold,” Mikey said.
“We’ll be there soon,” Rachel said.
“I’m scared.”
They slowly trudged through the snow banks for half a block, could hardly see through the white-out of blowing snow, and finally came to the wooded, untamed lot edging Jack Weinstein’s property. Barely visible next to the lot was his big home on the corner with its snowy path to the dark-stained front door.
In the thick woods a few yards away, there seemed to be a partially buried, snow-covered deer or other animal, and Rachel stopped to stare at the curious sight. Jacob, with Mikey on his back, continued to Jack’s house.
She carefully stepped off the sidewalk and walked a few yards through snow to the frozen form in a little ditch among the trees. Suddenly she recognized the snow-encrusted naked woman, and she suppressed a scream.

Chapter 3
Jack – Monday morning, November 20, 1989
Amid the mess of papers, files, and open scores on his study desk, Jack found an open space where he set down his breakfast – a cup of dark-roast coffee with milk and a plate of toast and apricot jam plus a half-dozen almonds. It was just after 8 on Monday. Sarah and Joseph were not downstairs yet, and Sue had left for high-school. Last night’s party had filled the house with the voices of a score of people, but it was silent now, and he felt haunted again by the feeling he had for months now of living in a sort of vacuum, as if he floated weightless on the surface without any genuine contact with things. The worst of it was that he could do no real work, no composing. Mostly, though, he felt trapped inside what had become the melodrama of his marriage. Several times at the party last night, Sarah had struck out at him; naturally he…