"A Burnt Offering - a novel/fable" about Israel and Iran

I've radically reconceived and expanded my novel about Israel to focus on the threat of a nuclear exchange with Iran. Now taking place in the present, it involves the dangerous Israeli relationship with Iran - and also the psyche and complex identity of Israel and of an Israeli family. Here is a brief synopsis of the much expanded and updated novel: 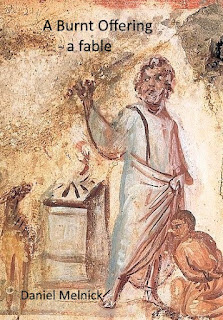 This compelling and thought-provoking novel unites a version of the biblical fable, the Sacrifice of Isaac, with a tale about Israeli Intelligence when the country seems on the verge of being attacked by nuclear-armed Iranian missiles. Ari Schneider, the head of Special Operations, believes that he must act, even if as a maverick, to warn world leaders that they must act to stop the movement toward nuclear war. He discloses to them that his operatives in foreign capitals have received weapons of warning which he alone knows how to recall – ‘small’ tactical nuclear bombs from the Israeli arsenal.

His father, Rami, a retired diplomat and elderly survivor of the Holocaust, struggles to confront and intercede in Ari’s actions. There is also a clandestine group of Palestinians whose leader plots to assault an Israeli installation in Jerusalem. And finally, in this moral fable, there is the Schneiders’ adolescent son, Moshe, who courageously confronts his father with knowledge he has gleaned from his scientist cousin in America about the horror of nuclear war. The unfolding fable advances in tandem with Ari’s undercover operations to create a unique and disturbing short novel.

As the action of the ‘special operation’ heightens, the parable becomes more terrifying and develops in mystery, complexity, and tragic intensity. In a series of confrontations with his wife, daughter, son, and his father, Rami, Ari still resists despite the tension of self-doubt in him, and in the climactic encounter between father and son, Rami argues that the ages-old struggle marking the past of the Jews must also mark their future, and that nuclear weapons can never be used in a just cause. Ari holds fast, and in an ultimate attack on his son, echoing the Sacrifice of Isaac, Rami compels himself to tell Ari something about his origins that invalidates all his assumptions about his identity. The double bind of his fate collapses in on him, and with nothing more to hold him up, he suffers a suicidal breakdown.

Rami’s final monologue reveals his lie to his son. The old man is harrowed by the responsibility of how to act for peace in a world of extreme and pervasive violence; such are the conditions that Ari tried to face with his desperate acts and which now the world at large confronts.