[Here's a link to the YouTube video of Jeanette's show:
https://www.youtube.com/watch?v=40YY0m6yyaw ] 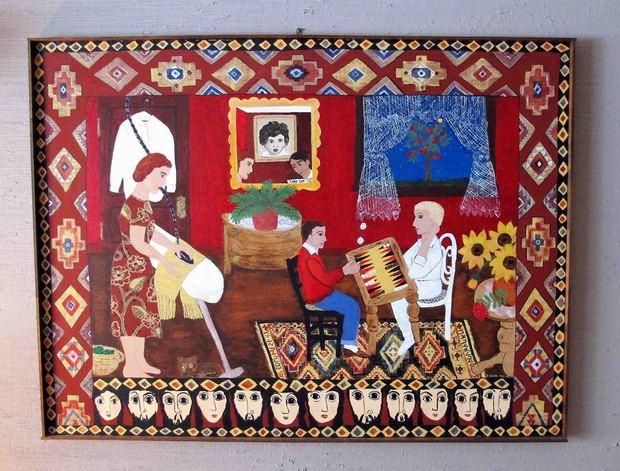 Art is always personal. But it goes beyond that in the case of Jeanette Arax Melnick, who will exhibit her works at the Beachwood Branch of the Cuyahoga County Public Library. (John Petkovic/The Plain Dealer)
PrintEmail

By John Petkovic, The Plain Dealer
Email the author | Follow on Twitter
on December 03, 2015 at 2:15 PM, updated December 03, 2015 at 2:35 PM
CLEVELAND, Ohio -- Art is always personal. But it goes beyond that in the case of Jeanette Arax Melnick.
Yes, there is a personal side in works by the Beachwood artist, who will exhibit her paintings at the Beachwood Branch of the Cuyahoga County Public Library during the month of December.
(The show opens at 2 p.m. Sunday at the library, 25501 Shaker Blvd, Cleveland. For more info, go to cuyahogalibrary.org/Branches/Beachwood.aspx or call 216-831-6868.)
You can see it in "The Quince Tree," a work that was inspired by a photo of her and her father, taken when she was a little girl, in 1946. The photo is in the work itself, along with photos of her grandchildren, children and husband.
But her relationship with the world is as much spatial one – in which she absorbs aspects of it through the senses or through patterns rather than just the heart or mind.
"Sometimes I just look at the world and see all these geometric shapes and I see aspects of my paintings in them," says Arax Melnick. "Like right now I'm sitting in a room looking at pillows or I could be looking at an oriental carpet and finding interesting patterns."
There is little pattern when it comes to divining the Fresno, Ca. native's style – which shoehorns folk art and "museum type art," as she likes to say.
"Art was always my companion and I never sought out to follow a particular style or painter," she says. "I started to study painting at (University of California, Berkley), but I switched to history because I realized that I wanted to be my own painter."
She delved into medieval history, along with the "flatness" found in its art.  She has created in the shadows of a family history that extends back to the Armenian genocide of 1915 – which led to her family settling in California.
"Armenian history is very complicated, especially with Turkey denying the genocide of 1.5 million Armenians," says Arax Melnick, whose husband Daniel Melnick recently released a novel that honors the memory of the genocide. "And yet that complication has given me a feeling for the suffering of all mankind."
"As a child, I was inspired looking at old Armenian manuscripts and seeing these people with big brown eyes and soulful looks," she adds. "They look like they've suffered and yet survive and go on."
Sid Vicious -- the English punk from a much later time, 1970s London – captivated her in a very different way. 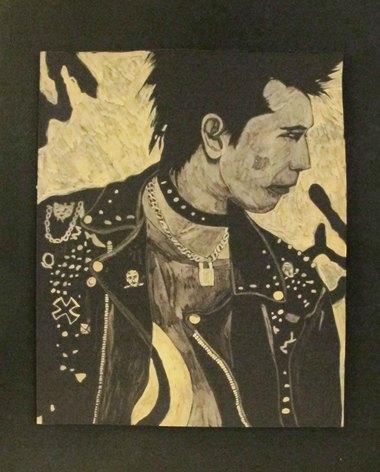 "Sid Vicious," one of works by Jeanette Arax Melnick that will be on display at the Beachwood Branch of the Cuyahoga County Public Library.John Petkovic/The Plain Dealer
"I never listened to his music, though I know Aaron and Lennie have," says Arax Melnick, referring to her sons, co-founders of legendaryCleveland hardcore band Integrity. "I just loved his face and the zippers."
For years, the painting hung at the old Arabica on Coventry. Arax Melnick received a number of offers for it, but chose to hold onto it.
"It's hard to give up on that Sid Vicious," she says. "I've never looked at the money side of it."
It's all matter of perspective, even when it comes to art.
"I tend to avoid perspective and I think it's given my work a certain character," she says. "I'll have a table that looks like it's floating and could see it as an illusion, but to me it's just how I see it and see the world. So I guess you could say the world is an illusion, too."
Posted by Daniel Melnick at 5:15 PM